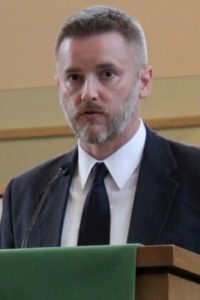 In Parlous Angels, Ed Southern’s characters are just as the title suggests: dangerous, precarious, a little desperate, more than a little serious. Most live out their days with a stoic acceptance of their lot and some make serious attempts to escape. Whether contractors or academics, these people are deeply connected to the land that sheltered and bruised them: rural Lincoln County and the city of Charlotte.

Q: I love the title; what inspired it?

Ed: Lord, it’s been so long I hope I remember. I first heard the word ‘parlous’ in college and loved it right off. It began as a regional, late Middle English contraction of the Latinate ‘perilous,’ which you can hear in its pronunciation (especially as it’s pronounced by someone with my accent), but somewhere along the line it took on more meanings–keen, shrewd, wicked, or extraordinary.

I should clarify – I said I heard it ‘in’ college, but I should say ‘during.’ I heard it on the morning show of a classic-rock radio station: “These are parlous times we’re living in.” I honestly didn’t know how archaic and obscure it is until after the book came out.

Q: Many of your characters are intelligent and no-nonsense no matter what their circumstances. What do the characters who populate your stories want readers to understand about them and the place that’s dear to them?

Q: The people in your stories seem resigned to their hardships and have a great deal of dignity. They remind me of the people I grew up with in rural Vermont. Would you talk about the role geography might play in shaping world view and character?

Ed: Oh, that’s a question with vast answers. To be honest, though, I tend to think more about history and culture and their roles in shaping behavior and belief and character. I feel that geography is just a given, to which most people adapt as best as they can.

Having said that, flatlands make me nervous.

Q: Your stories are subtle and richly, but efficiently, crafted. Would you talk about your process?

Ed: Why thank you. When I wrote most of these stories, I was young and my process was to squeeze out some writing time whenever I could. I’d go to a bar or a late-night diner after work and write as long as I could. I’d jot down notes during my lunch breaks. Later I began waking up very early in order to have an hour or two to myself. I still do that.

I’ve never been a writer who rushes through to get a complete draft down on paper, which I then go back and revise or rewrite from start to finish. That works for some writers, but not for me. I take my time and revise as I go. To say that ‘the end of the story depends on the start’ seems obvious, and banal, but that should be true not just of the plot but of the rhythm, the tone, the voice. Please pardon the too-obvious comparison, but if the foundation is skewed by a half-inch, the roof will be skewed by a foot.

That’s not to say I didn’t go back and revise or rewrite some of these stories from start to finish. Or should have.

Ed: Today? I owe Virginia Woolf an apology. In college I avoided her as best as I could (a friend once said that when he died and went to hell, the Devil would put the complete works of Virginia Woolf in front of him and say, ‘You can leave when you’re finished’). I adore her now. For going on three decades now, I’ve had a love/hate relationship with Salman Rushdie’s fiction. (I should add that it’s a one-sided relationship, as I don’t think either he or his novels give a damn what I feel about them.) If I like one of his books, I love it with a fierce and abiding passion. If I don’t like it, I can’t get through the first fifty pages.

The other writers I most admire now include Michael Ondaatje, Hilary Mantel, Gabriel Garcia Marquez, Jane Gardam, and Susannah Clarke, whose Jonathan Strange & Mr. Norrell I am an evangelist for.

When I began writing the stories that coalesced into Parlous Angels, though, I still was very much under the Hemingway spell. I think most young male writers have to go through that stage. It’s boring and pretentious-but, sadly, true-to say I taught myself to write short stories by reading In Our Time and Men Without Women, over and over and over.

Q: Your endings are sublime in their elegance and economy. How do you find the end of a story?

Ed: With every fiber of my being, I am fighting the urge to reply with something precious and disgusting like “I don’t find the end – the end finds me!”

But I don’t know. Some stories – “The Parlous Angel,” “Squirrel Hunting,” others – I knew the end of before I started writing. Some were based on stories I’d seen or heard, so the ending was already there. Some stories I just kept telling, until I decided to stop.

Q: Like many of the stories in your collection, “At a Gypsy’s Camping Place” has the quality of a legend. What inspired it? Were local legends prominent in the development of your storytelling? Did you grow up hearing them?

Ed: Nine years after the book came out, and someone finally makes the connection between these stories and folklore. You’re my new favorite reader, Katrina.

“At a Gypsy Camping Place,” though, was one of the few stories I made up more or less out of whole cloth. Almost all of the other stories had at least a small basis in something I’d seen or heard: I’d take a story or situation and make it “more dramatic” (which usually meant making it worse), or I used a real-life anecdote or incident as the entry point into a larger story. “At a Gypsy Camping Place” I just made up as I went, from start to finish. Until I ended it the way I did, I thought I was going to end it very differently.

I grew up reading every book of North Carolina folklore and ghost tales that I could get my hands on, but I also grew up hearing stories told. My father and his family are great storytellers. I’m not. Like the Irish say, “A writer is just a failed talker.” Lucky for me, my mother’s family were quiet people who loved to read.

Q: You are the Executive Director of the North Carolina Writers’ Network. What changes have you seen in the state recently whether in the writers or in the writing? What would you like to see for North Carolina in the literary sense?

Ed: The landscape for writers has changed in drastic and uneven ways, not just in this state, but all over the world. We have more people writing now, even here in the Writingest State, and those writers have more avenues to publication available to them than ever before. That, in and of itself, is a great good.

At the same time, though, the infrastructure for writers – the support system to help them create, and find readers, and worry as much about quality as quantity – is not as strong as it once was. It’s harder and harder, to the point of impossibility, to make a living as a creative writer. Publishers ask more and more of writers, including multi-book contracts that, far too often, don’t allow them the time and space they need to create their best work.

Q: Speaking of change, how has the area you were raised in changed, both in its landscape and its people?

Ed: When I was growing up, to go see my grandparents in Lincoln County we’d get off the interstate at Highway 150 just outside Mooresville. Mooresville then was a little textile-mill town, and there was a single mom-and-pop diner at the exit. Big Daddy’s Fish Camp was about a mile down the road. When I was in high school someone opened a McDonald’s there.

Now Mooresville is a booming Charlotte suburb, and that exit has at least one of every kind of chain eatery you can imagine: Cracker Barrel, Chic-fil-A, Bojangles – and those are just the ones I like. (At least, I assume they’re still there – I do my best to avoid that exit, because the traffic there seems always at a standstill.)

I believe that the going definition of ‘progress’ is faulty.

Q: What are you working on now?

Ed: I have one novel I’m shopping, and another I’ve just started.

Ed: I’m not aware of a common answer to that question, one that would apply even to any two of these characters.

And it’s other people’s desire for, and definition of, respect that most often thwarts that desire.

Ed Southern is the author of The Jamestown Adventure, Voices of the American Revolution in the Carolinas, Sports in the Carolinas, and the story collection, Parlous Angels.  He lives in Winston-Salem, and is executive director of the North Carolina Writers’ Network.

You can learn more about the North Carolina Writers’ Network here: NCWN

You can read another interview with Ed here: Journal Now

You can purchase Parlous Angels through your local bookstore or here: Press 53