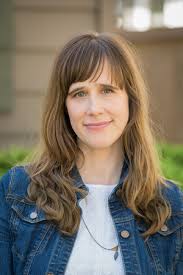 I love a good dystopian novel and even more, a dystopian novel written with a literary sensibility, and The Salt Line by Holly Goddard Jones was so much fun to read. Creative and thought-provoking, subtly political and intelligent, and a riveting story as well. Holly is the author of the novel The Next Time You See Me and the story collection Girl Trouble.

Q: This novel is very different from your first; its premise is conceptually brilliant. What inspired The Salt Line?

Holly: I didn’t set out to write a dystopian novel—it kind of feels like an extended accident. I started writing what I thought was going to be a short story, a horror story, after I finished my last novel. It just seemed like a fun thing to do after years of trying to do self-consciously serious, literary things. The tick premise was based on some summer hiking experiences I’d had in Sewanee, TN. I thought they’d make an interesting “monster” for a horror story. But as I wrote, I kept trying to explain the why of the ticks in a way that a horror writer probably wouldn’t bother to do. Why do they exist? Why are they so dangerous? Why are these people putting themselves in the path of such a dangerous bug? And that’s how I got into the dystopia stuff and the societal commentary. It took over. And before I knew it, I was 75 pages in with no fast end in sight.

Q: When you’re creating a world that looks so different from the one we inhabit I imagine there are challenges. What were some of the challenges you encountered with this story?

Holly: You have to decide where to draw a line—what you’re going to explain and what you’re going to leave to the imagination. That was hard for me. Coming from literary realism, I felt this real obligation to make sense of every oddity in the world I was writing about, and there’s just no way to finish a book, ever, if you do that. So for instance, I barely even got into what the years immediately around the tick infestation and rezoning were like. I just hoped that the reader would be satisfied by the vague shape of those events and accept their aftermath as I presented it.

Q: You have a disparate set of characters brought together by circumstance. Who was the most difficult character to figure out?

Holly: Edie, actually. Which is funny, because she is probably one of the novel’s most “normal” characters, and she’s also the closest thing it has to a protagonist. Normal characters are the trickiest to write. How do you make them normal and interesting? And Edie is beautiful—it’s one of the first things you learn about her—and it was very, very weird for me to write about a beautiful woman, especially one who has a kind of practical handle on her own looks and the effect they have on people. I can more easily imagine being a murderer, apparently.

Q: What do you think contemporary dystopian novels can do in a literary sense that other genres cannot?

Holly: They’re a way to write artfully about an extraordinary world. I think that’s one of the reasons literary writers are so drawn to them. It’s serious play. You can invent, and go over the top, but it’s all anchored by the commentary you’re making. And that’s another thing: dystopias can be pointedly political in a way that most literary fiction doesn’t get away with being.

Q: What aspect of this novel gave you the most fun?

Holly: I loved writing about Wes Feingold’s development of Pocketz. I loved writing Jessie Haggard’s terrible song lyrics. And the little monologue in the book’s center, where June tells the story of how she found Violet—that was a good time, too. Texts-within-texts are really pleasing to me, for some reason.

Q: How close do you believe we are to living in this world you’ve created where a tick bite can be rapidly fatal and the environment in which people safely inhabit shrinks to a fraction of what it was?

Holly: I mean, I certainly don’t mean to present this book as prophecy. I wouldn’t guess that the apocalypse will be carried out by ticks. I think it’s likelier that insect-borne diseases would be one danger posed by changing climates, along with a bunch of other issues. But I’m trying real, real hard not to see disaster around every corner. I’ve spent the last year trying to live more sustainably while also thinking more positively, and I’m doing both of those things for my children.

Holly: I’m writing a companion novel to The Salt Line. It’s set about 25 years earlier in time, and I’m thinking of it as kind of an all-girl Stand By Me.

Q: What do you desire, right at this moment?

Holly: Another cup of coffee. I bet you get that answer a lot!

More about The Salt Line here: Paste Magazine and The News & Observer