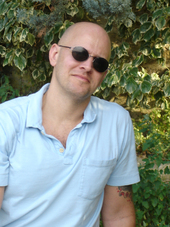 The Weymouth Center for the Arts & Humanities is fortunate to have one of the best contemporary poets in the country volunteering his time and expertise helping local kids explore their creative impulses one week during the summer as the camp’s director. John’s poetry is cerebral and intuitive, his last two books dreamlike in their wanderings.

Q: You’re an artist as well as a poet. Will you talk about the ways poetry and abstract art are similar? How does the creation of poetry differ from your art? How much time do you devote to each?

John: I’m not a trained artist (painter) by any stretch of the imagination. I grew up around a (portrait) painter, so there was certainly much discussion regarding art when I was younger. I didn’t paint much, though, until I was in my thirties. Painting is very spontaneous and unmethodical for me, though I think I have a sense of composition or balance on the canvas that also shows up in my poems, or at least informs them, or perhaps it’s the other way around. At any rate, composition on canvas and composition on the page seem to complement one another. I haven’t painted that much in at least five years, maybe more, and miss it sometimes, but I’ve been pretty focused on writing, and I think that’s where my emphasis needs to be right now.

John:  strange theater came out in 2015 and Illusion of an Overwhelm in 2017. They were both released by New York Quarterly Books. I’d like to think that each collection offers a unique gestalt, if you will, but it’s probably best for me to let others comment on that. I do think, or hope, that my range in terms of content, and my ability to capture emotional and experiential nuances, have evolved, but again, others should probably comment on that.

Q: Can you tell us a bit about your process of writing a poem?

John: It’s hard to say, as there are different processes, depending on the day, the mood, the poem. I try to write even when I feel that I have nothing to write about, or don’t feel particularly inspired. Sometimes inspiration comes about as a result, sometimes not. Also, revision can be inspired as well. Most of my poems undergo quite a bit of revision, and now I enjoy tweaking and tweaking and tweaking a piece, finding new possibilities, adding, subtracting, just letting the piece continue to evolve. I think I’m more patient with the process than I used to be, which seems like a positive development.

Q: You chair Weymouth’s Write-On camp in the summer. How essential is providing an opportunity to create to our kids? You’re a wonderful teacher. The kids love you. What’s your secret and what have the kids taught you about your own work and process?

John: I think it’s very worthwhile to introduce the writing process, and/or continue to encourage it, in younger people. If I hadn’t had the artistic process in my life, esp. as a teen, I think I would have been completely lost. Some kids are very interested right away, some will become interested, some will find that the creative/artistic approach complements other interests, whether they be in the humanities or sciences. I don’t have any secrets, that’s for sure! I’m not even sure that I’m a very good teacher, Katrina, but I do think it’s important to encourage young people in whatever way. And Weymouth is, of course, a beautiful place, one conducive to expression and learning.

Q: How has the landscape of poetry changed in the last few years?

John: This may be a bit of an exaggeration, but I’ve found that American poetry seems to be more extreme in one of two ways. Some poets are leaping into the nonlinear or surrealistic while others are clinging more loyally to the narrative approach. There are, of course, poets who are blending the two. I wonder, though, if this extremism is a response to the times, that we find comfort in either plunging into alternate forms of meaning (or meaninglessness) or adhering to utilitarian approaches, conventional uses of meaning.

Q: You’re also the founding editor of Pedestal Magazine. Can you tell us about that?

John: The magazine was founded in 2000, so we’re approaching eighteen years of publishing. We publish a wide variety or poetry and reviews, and occasionally we feature fiction and other genres. We have a wonderful staff. Our next issue will come out in June 2018, and we’ll be accepting work in May 2018. The magazine can be accessed at www.thepedestalmagazine.com.

John: This is a very difficult question as every great poem probably succeeds on its own terms; that is, what it promises and how it delivers on those promises or, alternately, resists delivering on the promises. That’s the thing, every poem creates its own universe, its own orbits within the poem, its own centrifugal and centripetal forces, but then also its own novae and losses of orbit and implosions and celestial collisions. Of course, there are obvious things, powerful voice, imagery, music, use of metaphor, theme, but even these elements are often multilayered, elusive, and paradoxical, so again, every great poem seems to create its own rules and then either adheres to those rules or breaks them in compelling ways.

Q: What are you working on now?

John: For a while, I was working on a series of poems that started with the death of my uncle, but that project seems to be on hold for right now. I’ve launched into a different series of poems that, I think, is allowing me to address new experiences and existential contexts as well as variations of voice and new possibilities re language. I try to stay engaged with the process, the practice. I really look at writing, in whatever form or genre, as a practice, one that I hope I continue with for the rest of my life.

Q: How is desire best manifested in a poem?

John: This would probably be an extremely fertile topic for discussion. What occurs to me is that desire is probably the primary fuel or inspiration for a poem. Desire is the fundamental prompt, it seems, whether it be the desire inherent to sadness or desire inherent to recollection or desire around love or lost love. I mean, in western or Miltonic terms, we’re either desiring the restoration of Eden or lamenting the loss of it, which is a form of desire as well. The Greeks talked about Eros (and Thanatos). Eros is essentially the life force, as I understand it. I think it is also the impulse to create, whether biologically or artistically. So, I guess I’d suggest for consideration that desire is inherent to art, as it’s inherent to life in broader terms. Speaking aesthetically, perhaps the great poems are able to manifest that desire with the least blurring or impediment, whether stylistic or egoic, invoking any number of emotional responses, all of which may ultimately be related to the essential experience or phenomenon of desire.

John Amen is the author of several collections of poetry, including strange theater (New York Quarterly Books, 2015), a finalist for the 2016 Brockman-Campbell Award. He is co-author, with Daniel Y. Harris, of The New Arcana. His latest collection, Illusion of an Overwhelm, work from which was chosen as a finalist for the Dana Award, was released by New York Quarterly Books in 2017. His poetry, fiction, reviews, and essays have appeared in journals nationally and internationally, and his poetry has been translated into Spanish, French, Hungarian, Korean, and Hebrew. He is a Staff Reviewer for No Depression. He founded and continues to edit The Pedestal Magazine.

You can read a review of Illusion of an Overwhelm here: http://losangelesreview.org/book-review-illusion-overwhelm-john-amen/

You can read a review of strange theater here: https://pankmagazine.com/2015/09/08/review-strange-theater-by-john-amen/