The Barbarian Nurseries by Hector Tobar

“The Barbarian Nurseries” by Héctor Tobar offers a hilarious look at our solipsistic culture and a poignant reminder of the Mexican immigrants who live among us, often invisible, taken for granted, and ultimately powerless. 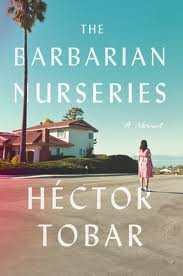 The Torres-Thompsons live in an affluent neighborhood on the outskirts of Los Angeles. Scott Torres’ software executive job has enabled him to provide his wife with a view of the Pacific and his boys with the kind of toys that inspire the maid to name their bedroom The Room of a Thousand Wonders. With the help of a gardener, a nanny and a maid, Maureen is able to teach art as a volunteer at their sons’ private school and stay home the rest of the time with her three children. When Scott loses money in the stock market, however, he’s forced to let go of the gardener and the nanny, leaving the cooking, cleaning, and baby-sitting to Araceli, the tall, dour-faced Mexican maid who was “more likely to ignore you when you said hello in the morning or to turn down her eyes in disapproval if you made a suggestion.”

Disagreements over money ensue and when the last argument wreaks havoc on the marriage, the two go their separate ways to lick their wounds: Scott to a coworker’s and Maureen to a spa with only her young daughter in tow. Both parents neglect to inform Araceli of their plans or their whereabouts and soon she feels compelled to take the boys into LA to search for the boys’ paternal grandfather, a decision which will impact her standing not only in the household, but also in the country.

“The Barbarian Nurseries” offers a hilarious look at our solipsistic culture and a poignant reminder of the Mexican immigrants who live among us, often invisible, taken for granted, and ultimately powerless. Tobar uses the omniscient point of view effortlessly, allowing the reader to see Araceli, a surprising, larger than life character, through the eyes of a multitude of people, people who perceive Araceli either as a victim or a criminal depending on their particular biases and agendas.

This novel is a comment on immigration in today’s volatile socioeconomic environment, a comment on our relentless desire as a nation to accumulate and consume more and more, and a comment on the pliable circus our media has become. Tobar’s love for his characters is obvious and none is without culpability of some degree. Intelligent, provocative, this book is loads of fun to read, and though the reader will be confronted with some unflattering truths, he can still come away from the experience entirely hopeful about humanity.

*Review first appeared in the December 18th edition of The Pilot