The Book of Laney by Myfanwy Collins

We see the stories in the news, stories of mass shootings at schools, stories of lonely misfits planning their revenge on their peers, and we try to understand but always seem to fall short. In “The Book of Laney,” by Myfanwy Collins a similar tragedy occurs and the story unfolds to the reader through the eyes and heart of Laney, the sister of one of the shooters. Literature can take on the truth of violence in a way that film could strive 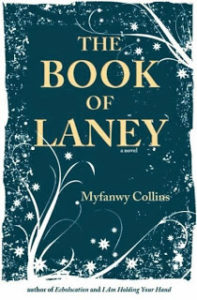 Literature can take on the truth of violence in a way that film could strive for but usually fails. In whatever medium chosen, it’s important that depictions of violence be met with consequence. In “The Book of Laney,” there are consequences for the shooters, their victims, their community and those loved ones left behind. In the hands of a lesser writer, this novel wouldn’t be the thing of beauty it is. In the hands of a lesser writer, the dark side of humanity wouldn’t be so acutely and artfully contrasted against its magnificent light.

It’s a novel that works on so many levels. These characters are so thoughtfully drawn, every nuance skillfully observed, that there is no question of their reality. In Myfanwy Collins’s previous novels, she’s proven to be masterful at rendering atmosphere and mood, and this latest work highlights her ability. The main character is thoroughly suffocated by the fallout of her brother’s actions, and that suffocation shows up in her thoughts, her loneliness, and in the new landscape she finds herself in. It is no accident that the novel is set during winter and that its heroine Laney is sent north to her grandmother who lives literally on the edge of society. It is an exile at once miserably unfair and necessary.

Collins is a poet. She writes in prose but her sentences sing. Her images, shockingly accurate and beautiful, are strung along on the forward motion of plot like sparkling jewels on a chain. She has the ability to render that which is nearly impossible to describe:

“I wore my brother’s crime like a second skin. It constricted me, tight like a snake’s skin I feared I’d never shed. That was who I’d become: The sister of a murderer. Not even being the daughter of the murdered could erase it. From that point on, my identity belonged to no one but West.”

She also uses metaphor successfully and wisely as in this passage:

“One photo of a fiddlehead pushing up from beneath the compost of leaves, bright green and delicate. I was touched by its strength and lost in how the light illuminated it. The fiddlehead had pushed up through the darkness and lived. Despite being covered over and forgotten through the long, cold winter, it had beaten the odds and survived.”

Young adults face difficulties that feel insurmountable, difficulties they feel they won’t be able to overcome or survive. In “The Book of Laney,” they will meet a young woman who feels the same way, a young woman who journeys through darkness and allows love to illuminate her, light to nurture her, until eventually, she’s able to push up into wholeness again.