The Other Life by Ellen Meister

Imagine having the ability to second guess your life’s most significant choices. Imagine the ability to go back to the fork in the road and travel down the other path. Would that ability be a gift or a burden? 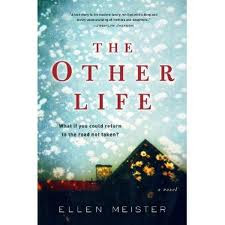 In Ellen Meister’s new novel, “The Other Life,” Quinn Braverman is living in the suburbs, happily married to her steady and giving husband, mother to a lovely son, and pregnant with her second child. Though she lost her mother to suicide seven years earlier, she has a good relationship with her brother and father, and a friend in the quirky woman who lives next door. Life is good, if not terribly exciting. However, the day she learns that the baby she’s carrying has a serious, and potentially fatal, abnormality, her serenity is shattered.

Quinn has always known about the portals, the openings to another possibility. She’s never actually tested them, though she’s come close out of curiosity. Now, desperation drives her to slip through one of the portals, a crack in her basement wall, to her other life, the one in which she’s remained with her needy, shock jock boyfriend, living a childless, high-powered life in the city. In this alternate reality she can feel relief from the pain of her future and relief from her fear for her unborn daughter. Something else tempts her to keep returning to this other life: in this reality, her mother is still very much alive. After moving back and forth between the two lives, Quinn is forced to make a decision because the portal is closing.

Meister magically makes the impossible believable and keeps the reader guessing right to the end. “The Other Life” is funny, sexy, poignant, and also unflinching in its willingness to tackle subjects some people may find difficult: depression, sexuality, quality of life. “The Other Life” is a stunning story of love, marital love and sibling love, yes, but perhaps more emphatically, the indestructible love between mother and child.

*Review was printed in the May 15th edition of The Pilot.