Salvage the Bones by Jesmyn Ward

There’s nothing pretty about poverty or the cruelty of dog fighting, however, Jesmyn Ward writes about both in her latest novel, “Salvage the Bones,” with spectacular beauty. 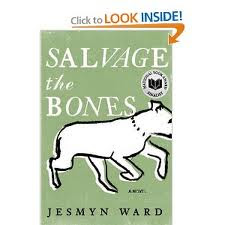 Esch, the narrator, is fifteen and living in a small Mississippi town along the Gulf with her alcoholic father and her three brothers, one of whom loves his pit bull beyond all reason. Esch, enthralled by the myth of Medea and Jason, begins to see the story mirrored in her own life, in her dealings with Manny, the young man she imagines she loves, and in her brother’s dog, China, whose instinct to kill seems to be fiercer than her instinct to nurture. Motherless, Esch is left the only girl in a house full of males, and when she figures out she’s pregnant, she tells no one.

Ward structures the book using time. The story begins twelve days before Hurricane Katrina hits and each chapter is a separate day. We’re all familiar with Katrina’s devastation so tension is already built in, but Ward doesn’t stop with a little bit of trouble. She gives us characters so poor they’ll eat Ramen Noodles uncooked and chase them down with a packet of dry spice. She gives us a father stuck in his grief; a pregnant narrator who’s too young to be savvy in affairs of the heart, and a mother pit bull raised to fight, all on top of the category five hurricane bearing down on a family unequipped to properly prepare.

The story gripped me from the start and there were a few moments in which I found myself holding my breath, but what elevated this story from compelling to an absolute must-read was the quality of language:

“Daddy said that Randall and Skeetah and me came fast, that Mama had all of us in her bed, under her own bare burning bulb, so that when it was time for Junior, she thought she could do the same. It didn’t work that way. Mama squatted, screamed toward the end. Junior came out purple and blue as a hydrangea: Mama’s last flower. She touched Junior just like that when Daddy held him over her: lightly with her fingertips, like she was afraid she’d knock the pollen from him, spoil the bloom. She said she didn’t want to go to the hospital. Daddy dragged her from the bed to his truck, trailing her blood, and we never saw her again.”

Despite all the tragedy, this is a hopeful book, a testimony to the power of love and community. Currently, “Salvage the Bones,” is a finalist for The National Book Award, and this is one reader who’s rooting for it.