Alexi Zentner’s stunning debut novel “Touch,” begins much as a snowfall might, dropping quiet hints of tragedy and hauntings with a meditative melancholy, then builds in intensity until the reader is buried in the story’s fierce grip. Set deep in the woods of northern British Columbia, in a time when men dream of gold, the fight for survival, whether pitted against man or nature, is still very much relevant. 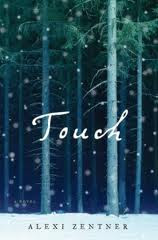 The novel opens with the narrator reverently describing his father’s skill floating logs down the river, and later, his skill with storytelling. The narrator, now an Anglican Priest, has returned to his boyhood town of Sawgamet to tend to his dying mother. The town, with its history of gold mining gone bust and its life-crushing winters is a character as indelible as the people who settled it. Pierre recounts the stories his father told him, how his father mangled his hand trying to tame the logs and how his grandfather, Jeannot, little more than a boy, walked thousands of miles across the continent to finally settle in an area of woods in spite of the monsters and spirits dwelling there. It was in those dark woods that Flaireur, a dog Jeannot had stolen from a witch, lay down to rest and refused to move except to drink from the river or relieve himself. Later, after he discovered his dog had a keen sense for gold, Jeannot understood before anyone else that gold’s promise of wealth was fleeting and real survival depended on making use of the trees. And it was under the shelter of those trees that Jeannot would fall in love with the woman who haunted him thereafter.

Zentner is a sublime storyteller. Clear, pristine prose and striking imagery make this book a standout. Sprinkled with magical realism, “Touch” is part adventure story, part ghost story, and foremost a love story, a testimony to the unwavering, enduring power of love, a love unhampered by ordinary boundaries of time and space.